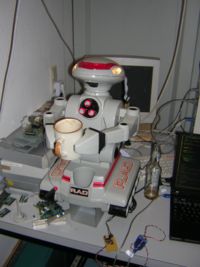 Suschman brought something nice from one of his latest garbage collection actions: a toy robot, which once could be RF controlled.

The robot is crawler-mounted, can bend the upper part of its body, can grab something with its arm and has a projectile-launching device built into its chest. Alltogether it resembles a bit to Evolver from the movie of the same title.

As the remote control is missing and the strange build-in China-made microcontroller was not going to talk to us without it, we decided to install a AVR instead. Suschman has done that, so the Mega8 can already control the robot's motors. There is also some sound module integrated in the robot, but it still needs some re-engineering. We did not get it talking without the original CPU so far.

In meantime Robby accepts commands via serial interface (UART), so all of its functions can be used. There is a automatic emergency shutdown if one of the motors is overloaded.

Sourcecode can be found in the SVN at https://roulette.das-labor.org/trac/browser/microcontroller/src-atmel/killerbot/

Robby can be controlled via serial console an accepts the following commands:

IMPORTANT Keep your thumb at the space bar to prevent the whole thing dropping off the table! Some command are not read correctly, so sometimes you have to hit a button twice (Bugfix on the way ;)