There is a complete DIY kit available to control a 16x16 LED matrix with an ATMega32. 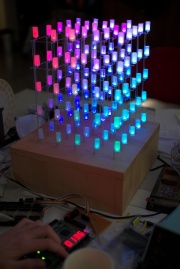 5x5x5 RGB-LEDs, individually controllable form a 25x25x25 cm cube. To control this 75x5 Matrix display we use an FPGA.

We don't sell cubes -- stop by and we will show you how to build one yourself... 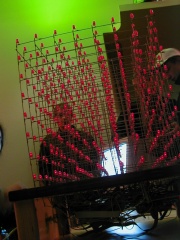 Martins build this wireframe cube out of 8x8x8 LED. Each LED is controllable by a microprocessor. There are a bunch of animations and even a game (pong 3d).

We don't sell cubes -- stop by and we will show you how to build one yourself...

144 flat surface-LEDs in a 18x8 format (original Blinkenlights) built into a defective Gameboy case. A ATmega32 controls animations, (soon) loads Blinkenlights movies (.blm) from a MMC card and reacts to the 8 buttons. The On/Off switch is inherited from the original, as well as the power plug. Also works on batteries. Longer description and pictures to follow ...

After the first Microcontroller Workshop we were looking for ways to beautify the Labor with our brand new Laborboards. Peter came up with the glorious idea to create a 8 times 8 display of low voltage light bulbs, screwed to a wooden board. No sooner said than done, in almost no time the first Borg emerged.

64 LED were not enough for André, so he built a new Borg out of 256 small yellow LED.

We have programed the games tetris, space invaders and snake for it. There is also a beautiful menu for choosing the games and of course nice animations.

It once was one of these ready-made LED tickers. We ripped out the control unit and replaced it by modified Laborboard with CAN connectivity. The ticker serves for displaying menues and operational states in our room automation projekt

For this Borg we developed a special animation language called BorgTextAnim to display ticker text. 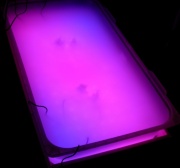 This Borg features a 8x16 RGB matrix mounted on a wooden panel. Above the LEDs is a plastic tank containing supersonic mist generators, which create mist from the water in the tank. The effect is especially beautiful when the mist is slightly moving.

The Borg is controlled by a FPGA.

To develop animations also without a Borg at hand, Martin wrote a GLUT-OpenGL simulator for Andrés 2D Borg and his own Borg 3D. The sources can be compiled under Linux and MacOS X. Needed: GNU make, gcc toolchain and an implementation of the GLUT API (e.g. freeglut).

Find the current source code in the Subversion. Check it out with: