In this project, we construct a binary watch using the common IKEA Ribba frame, several parts cut by the CNC, an AVR-Board and some digital RGB LEDs.

I was able to gather some cheap digital RGB LEDs from aliexpress and wanted to revive my old binary watch.

As before, an IKEA Ribba frame is used as a casing. This documentation is about the large version (50cm x 50cm) but should work wit smaller versions as well.

Thanks to some very nice and friendly Laboranten, I was able to cut my dxf-design on the CNC. The result is very good and precise!

To ease things up, the clock will be constructed in a three-layer design: Front - Division - Back 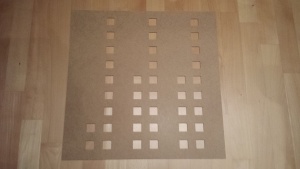 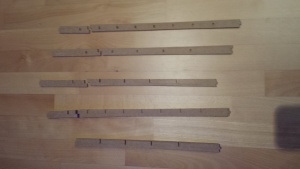 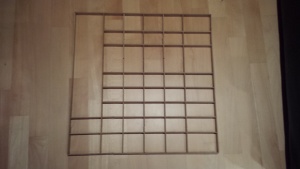 The mid part is designed as a kit which can quickly assembled to "some boxes", preventing the light of one box to bleed into another. The parts had to be splitted due to some limitations of the CNC.(Note that one seperator is missing in the image above)

The larger box will hold the electronic components later on.

The holes in the back are designed to fit the small LED pcb's exactly. They are positioned in the center of each cutout on the front. 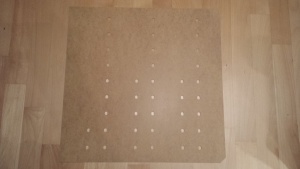 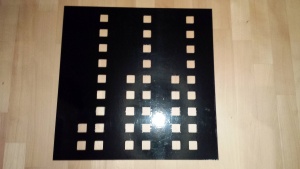 The front has been bonded with black adhesive instead of paint. The missing seperator has been milled.

All LEDs have been wired and tested. Currently there's no hot glue in the house, adhesive tape works as well.

[UPDATE] There was some laminating film left and it works! Four layers (2 pieces) do a very good job in diffusing the light. Maybe I'll stick with this.