This context type defines the storage structure used by an instance of the huffman decompressor. This means that a variable of this type may hold the information needed for decompressing (for example: the tree, buffers for bitwise reading, pointer to the reading-function).

This function can be used to set the address which is given as parameter to the reading function. The address is sored in the context and will be incremented by one automatically.

This function initializes the huffman-tree when first called with a new context. Every call to this function (including the first one) will return a byte of uncompressed data or EOF (0xFFFF) at the end of the compressed file. The function automatically calls the reading function if compressed data is needed.

A pointer to the reading-function is used to initialize a context. The function takes a parameter which holds the address to be read. The address is always incremented by one, so it is save to ignore the parameter and use an internal address variable. The function also may return an EOF (0xFFFF), but this is not needed as the data stream includes an EOF-marker. The function may read data from any location including streams.

When called the first time avr-huffman-decode allocates dynamic memory for the internal huffman-tree. The memory is allocated via the calloc() function and later freed automatically when reaching the END-OF-FILE marker via the free() function. The required amount of dynamic memory only depends on the number of different symbols (bytes) in the uncompressed file. For each different symbol three bytes are needed. So in the worst-case (all 256 different byte values are present) 768 bytes of dynamic memory are required.

Note: The used format does not store the tree in an optimal way. This is justified by the reduced complexity of the decoder. The overhead should be in the range of a few bytes.

The file starts with a 15 bit magic-value of 0xC0 0xDE. The last bit may be 1 or 0 so the first two bytes may read as 0xC0 0xDE or 0xC0 0xDF. The next nine bits represent the number of leafs in the tree. The last leaf is always used for the EOF-marker.

The tree structure is followed by the binary representation of the compressed data. The highest bit in a byte is considered the first bit.

The tree used in this example could be pictured this way: 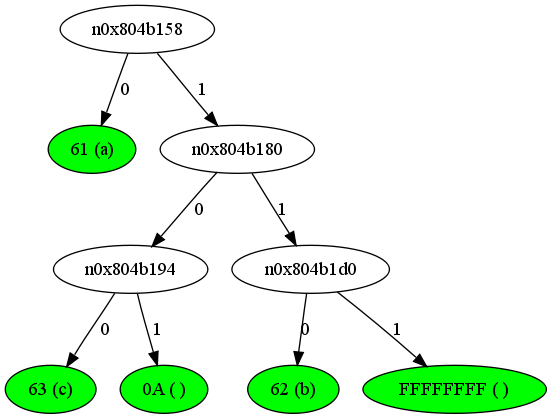