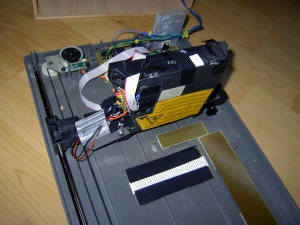 I made the haware mainly from stuff I had laying around (for the Germans: Edelschrott) but also from some stuff I had to buy specially for this project. 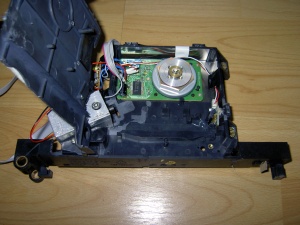 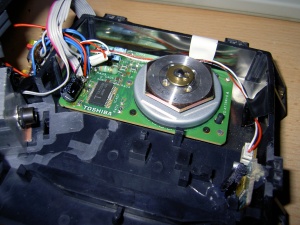 The polygon mirror assembly is mounted vertically on the flatbed scanners sled. The flatbed scanner sled is the Vertical axis, and the polygon mirror defelcting the laser in the scanner is the horizonbtal axis. Each Horizontal line is scanned about 150 times before the sled moves on to the next vertical position. The laser is scanned by the mirror continuasly at 55 Revolutions of the mirror per second, or 333 Hz scanrate, as the mirror is hexagon shaped. The exposure pattern is produced by turning the laser on and of synced to the rotation of the mirror.

There are two microcontroller boards used. One is a digital servo speed controller for the polygon mirror motor. It just runs the motor up to the exact speed when requested, and sends a servo locked signal while the motor is at the correct speed.

The other Board is the main board, which has the current source to control the Laser, and a driver for the stepper motor. This Board is connected to the PC through an uart. The PC instructs the machine waht to do. The PC can tell the main board to start the scanner and run the stpper to a specific position, and transfer data for scanlines, one line at a time. Each scan line is scanned about half a second, and then the PC tells the stepper to move on one position, and sends the data for the next scanline. During the half second, the line is exposed about 150 times.

The original laser in a laserprinter is infrared, and that wavelength doesn't work for exposing pcbs. I removed the infrared laser, and mad-engineer helped me to make a nice alluminium laser mount, and mill down the mirror assembly to fit it. As the lenses in the polygon mirror assembly had the wrong optical properties for my application (different wavelength and different focussing distance), I removed them all. The optical system now consists only of the laser, its focussing lens, and the polygon mirror. There is one problem with this: as the beam length varies with the angle of the deflected laser beam, the focus of the laser lens would also have to be adjusted for each beam length. As this isn't done, the laser gets blurry at the ends and the middle of the scanline. But this is not a problem in practice, as the image gets sharp enough. 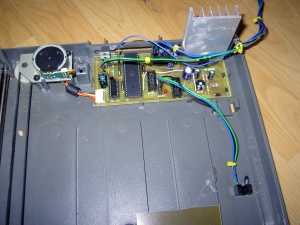 The main board, the stepper motor, and the opto to detect its 0 position

The motor controller has an attiny2313 microcontroller, and it's own 78L05 to make a stable 5V supply (using the one from the cable would leed instability, as the GND current varies in the cable because of the motor). I reverse engineered the interace to the polygon mirror motor. It has 12V powersupply, a speed control pin, which accepts a strange range of voltages, and a symterical frequency generator output (FG). This output is a zig zag shaped induction loop around the motor, which generates a feedback frequency of how fast the motor is going. This is fed to the AVR's analog comparator. The microcontroller locks this signal to a reference frequency of 2kHz, which yields 55.555555555555... rotations of the motor per second, and 333.333333...Hz scanrate.