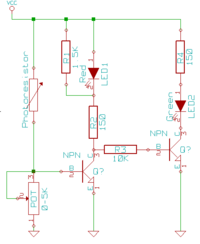 This is circuit for the daylight indicator

Geeks are a bit like Vampires - they usually fear the daylight. Now since the Labor has gotten new fancy window blinds, it has become hard to detect whether the big, bright, evil daystar shines or not. Therefore Soeren has built a little indicator light to display a daylight-threat warning (red light) or green light whenever it is safe to step outside ;-)

All values in this circuit may vary depending on your setup and parts used. So if you want to rebuild this circuit, you should first test it on a breadboard before soldering it all together ;-)